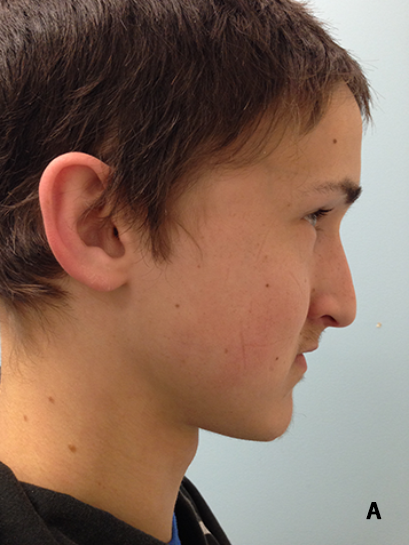 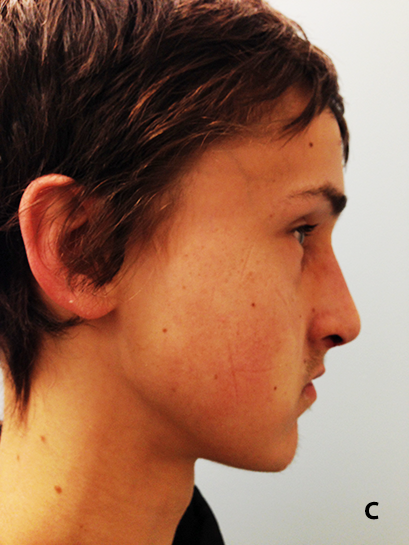 An otherwise healthy 19 year-old man was referred to my office for evaluation of a broken nose. Several weeks earlier he was involved in a severe motor vehicle accident and sustained complicated fractures of both the nasal bones and nasal septum. Fortunately, his injuries were limited only to the nose. Though injury was limited, the damage to his nose caused by the trauma was severe.

At the time I saw him, he did not have any nasal obstruction. However, severe nasal injuries such as these tend to cause breathing troubles over time. Trauma, such as broken nose and nasal septum fractures, often weakens the bone and cartilage support structure of the nose. Unable to sustain the contractile forces of healing, the weakened nasal skeleton and septum yield to these forces until they collapse and scar. Therefore, I recommended that he undergo a reconstructive rhinoplasty and septoplasty. The patient decided to wait and see how his nose would heal.

He returned to the office 3 months later with significant worsening of the external and internal nasal deformity (Figure A). In the “before” photo, it is apparent that the tip of the nose has collapsed and become under-projected due to lack of nasal tip cartilage support. Though the change in the shape of his nose did not bother him, he developed complete nasal obstruction on the right side as well as near-total nasal obstruction on the left.

A thorough physical exam revealed the cartilage of the lower two-thirds of his nose, including the tip of the nose and nasal septum, had deviated to the right side. Loss of support and scar tissue caused the nasal tip and dorsum to collapse (Figure B). Scar tissue also had formed on the inside of the right nostril, causing complete blockage of airflow. In technical terms, the mucosa (internal lining of the nose) of the right upper lateral cartilage had scarred to the right side of the septum causing complete blockage of the right internal nasal valve.

The extensive damage required a reconstructive rhinoplasty procedure consisting of open nasal reconstruction (rhinoplasty), septoplasty (straightening the septum) and turbinate reduction (which adds additional improvement to the nasal breathing passage). A splint was used on the outside of the nose to protect the delicate supporting cartilage grafts placed during the reconstruction. For uncomplicated rhinoplasty cases, I would not usually use splints inside the nose. However, the extensive amount of scar tissue made nasal splints necessary. The splints and sutures were removed 6 days after the rhinoplasty procedure.

The intent of the operation was to reconstruct the nose and restore nasal breathing. However, the appearance of the nose has improved significantly after surgery (Figure C). This occurs because form follows function and thus straightening of the nose (aesthetic improvement, aka form) improves nasal breathing (functional improvement).

“Our number one passion and priority is our patients. We strive to provide the highest level of personalized care and an exceptional patient experience. We believe in creating long-term relationships with our patients, which is why at Harmych Facial Plastic Surgery in Cleveland, Ohio you’re treated like a member of our family.”